Mrs Garnon has over 30 years of experience in the field of taxation having been a senior partner with KPMG. She was admitted as a tax partner in 2000 and went on to hold senior executive roles with the firm.

From 2009 to 2015, Mrs Garnon was the National Managing Partner for KPMG Australia’s Taxation Division. She has extensive experience advising both domestic and global organisations.

Mrs Garnon’s background includes Bachelor of Economics (Accounting Major) and Bachelor of Laws from the Australian National University. She is a Fellow of Chartered Accountants in Australia and New Zealand, a Chartered Tax Advisor and a Graduate of the Australian Institute of Company Directors. She is also a member of Chief Executive Women. 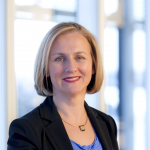